Visit us again for more details

Reading of The Rose by Christina Rossetti, by Alinca Hamilton

Melodia solo: Michelle Ammirati – Before It’s Over from Dogfight by Pasek & Paul

From the Melodia video archive: Arzular “Dreams,” by Tofig Guliyev, soloist Naila Aziz
Concert: Songs from the Heart, May 2010

Melodia solo: Colleen Christi Willett – You Are Not Alone from Into the Woods by Stephen Sondheim

Melodia solo: Rachel Wifall – His Eye is on the Sparrow by Charles H. Gabriel

Alinca Hamilton poetry reading, won’t you celebrate with me by Lucille Clifton

Instrumental interlude performed by Taisiya Pushkar, piano – To a Yellow Rose by Florence B. Price

Melodia solo: Larissa Flint – This is Me from The Greatest Showman by Benj Pasek and Justin Paul

Melodia solo: Lauren D’Imperio – Let it Be by the Beatles

This fall Melodia stepped through the looking glass with Incantations, an excursion into the secret recesses of the spirit world. Join us for U.S. premieres by C.V. Stanford and Robin Milford, and the world premiere of Ekō by Allison Sniffin, with butoh dance by Stêphanie Larrière. Be swept back in time with Shakespeare-inspired compositions by David Willcocks, and ancient, ancient melodies re-imagined by Mediaeval Baebes.

Selections from the Mediaeval Baebes songbook

A crowd of 90+ singers attended the first ever Melodia Summer Sing, coming together to explore and celebrate great music for women’s voices. Thanks to all who came out to sing together with us!

Gloria, by Antonio Vivaldi, the way it was originally, sung, by women’s voices
A Ceremony of Carols, by Benjamin Britten
Songs from the Libana songbook

Three voices from the past bring to life the story of Vivaldi’s great work as originally performed by the women and girls of the Ospedale della Pietà, in Venice, in 1715.

And a cast of three NYC actors:

This program is supported, in part, by public funds from the New York City Department of Cultural Affairs in partnership with the City Council.

“I am so grateful to the Melodia Women’s Choir of NYC for being the first US ensemble to perform my work and commission me. It moves me that my first piece for America will be for its women – the choir, the inspiring conductor Cynthia Powell, and the all-female string quartet that joins them. Most of all, my piece is for one American woman in particular: Zitkála-Šá. Eighty years ago, her opera The Sun Dance, made its Broadway debut without crediting her. By 1938, she had reached the end of her life, which had been packed with political activism and suffragism, including founding, and leading, the National Council of American Indians in the wake of genocide. My piece, Red Bird, is a miniature portrait of how her words resonate with me.” —Cevanna Horrocks-Hopayian

“The entire text of Where Shadow Chases Light (from Rabindranath Tagore’s Nobel Prize-winning collection of poems, Gitanjali, Song Offerings) vividly brings to mind experiences at yearly silent retreats on the Hudson at Linwood Spiritual Center in Rhinebeck, New York. During these weeklong retreats, I share Tagore’s sense of delight in waiting, in noticing, in knowing that ‘the happy moment will arrive when I shall see.’ And, too, there is the ‘meanwhile’ where ‘I smile and I sing all alone’ and the air fills ‘with the perfume of promise.’ I evoke the richness of this contemplative experience–filled with its active waiting and occasional moments of ecstasy–in my choral setting.” –Deanna Witkowski

This program is supported, in part, by public funds from the New York City Department of Cultural Affairs in partnership with the City Council.

The commission of Red Bird made possible by a grant from Elizabeth and Michel Sorel charitable Organization. Cevanne’s residency in NYC for the project is supported by the British Council and the Arts Council of England.

The Harmony of Morning

DVOŘÁK: THEMES FROM THE NEW WORLD

Read Melodia’s blog on the history of the Largo arrangement performed by Melodia in honor of all those who sing to survive and make the world a better place.

Myths and Stories in Song

Featuring the world premiere of commissioned work “Cassandra” by Hilary Purrington, plus: 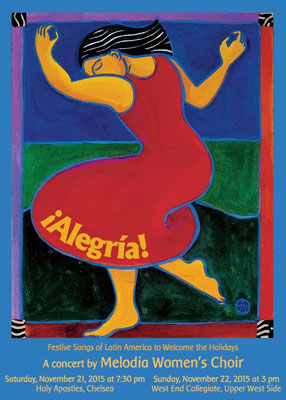 Myths and Stories in Song

Festive songs from Latin America to welcome the holidays 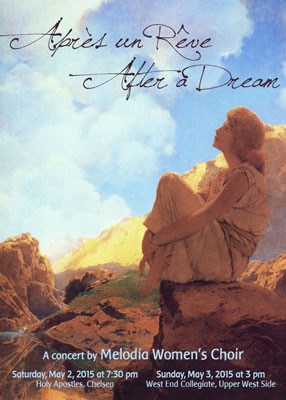 Après Un Rêve
After A Dream 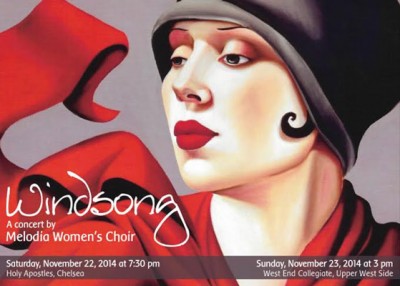 Plus selections by Duke Ellington, Jerome Kern, and more.

A Breath Of Spring

Colors Of The Sun

Presenting a rare performance of The Chambered Nautilus by American composer Amy Beach (1867-1944), plus the world premiere of The Journey, by Catherine Aks. The Seal Lullaby, by popular contemporary composer Eric Whitacre, along with works by Fauré, Holst, Verdi and Cecilia McDowall, complete our program of classical and contemporary works for the fall season.

Presenting the world premiere of Mornings With You, a commissioned work by award-winning composer Christina Whitten Thomas, with poetry by Brooklyn poet, Pam McAllister.

Songs from the Heart

Love is in the air with this concert of lusciously lyrical works from the romantic period and beyond.

Notes Upon the Breeze

Featuring the world premiere of a new commissioned work by Chris Lastovicka.

An evening of French choral works and other gems

Girl Groups from the 12th to 21st Centuries

Hear Me With Your Eyes

Twilight in the Garden of Dreams

Concert of mystical, darkly transcendent music for an autumn evening

Songs of the Sea – Haunting tales of the deep 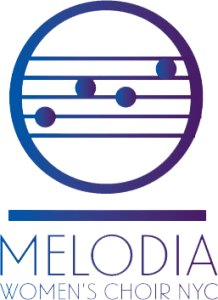 Be The First To Hear About Melodia’s Next Concert